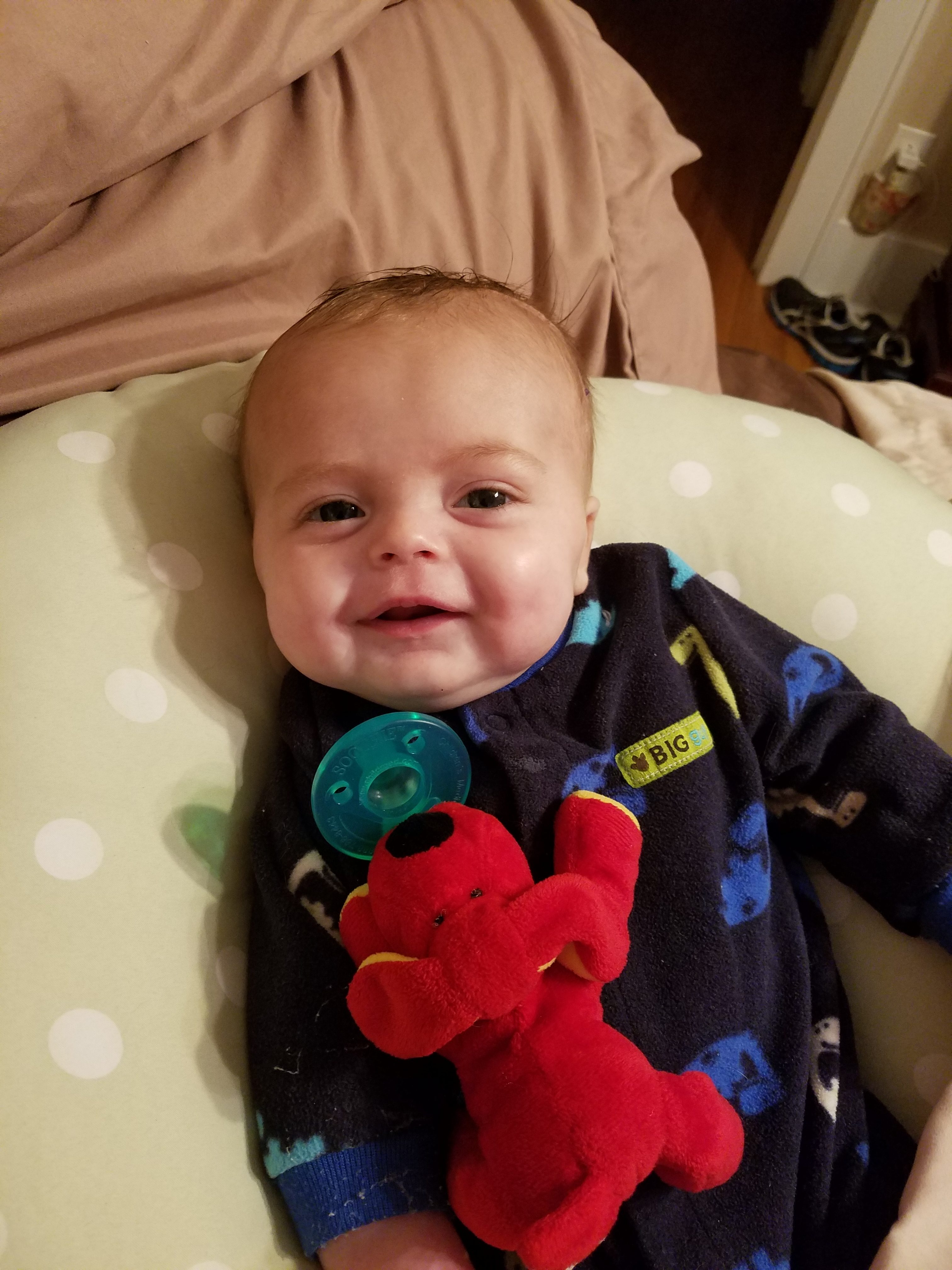 I have been trying to write this post all week.  I started on Monday when Logan had his last dose of chemo for Round 1.  Then we were informed that we could go home for a few days because his counts came back up quicker than they anticipated.  So, we have just been enjoying time home with our little fighter since Tuesday.  Tonight is our last night home so I wanted to make sure I updated you all on what’s been going on behind the scenes, per se.

Exactly one month ago today we found out that Logan had a brain tumor, and were pretty sure it was malignant.  It’s been a rollercoaster ride to say the least!  Kevin and I are beyond grateful for the outpouring of love and support we have received thus far.  Please continue to send positive vibes and prayers our way, we are just in the beginning of our fight!  We are also so proud of this little fighter we get to call our son.  He is so strong and resilient and proves the statistics wrong time and time again.

Now to get you all caught up…..

My father in law had to go back to North Carolina for a week or so.

Dani, Ali, and Colby put on a very successful fundraiser.

And I had a break down…I think everything just finally settled down enough for me to truly feel and think about what was going on.

I had been crying pretty much all day Sunday into Monday so I reached out to the social worker in Logan’s doctor’s office first thing Monday morning. They told me they were there when I needed to talk and I promised them I would reach out when I was ready to talk and I was (I still am).   I met with Courtney (the social worker) and Dr. Weintraub, Logan’s oncologist, on Monday afternoon (before we found out he could come home for a few days.)  They asked what my biggest concern was and I said “I don’t want my son to die!”  I have been so strong and confident up until then.  They said it was normal and I will probably always feel this way.  But they are still “cautiously optimistic” and he is doing so well right now that they aren’t concerned.

The thing is, I don’t want to feel that way nor think that way.  I am a firm believer in what you think about, you attract; that thoughts become things, but I can’t get that out of my head, even to this day….it sucks!!!

Kevin has been absolutely amazing and so supportive.  Anytime I get upset or mention that I feel that way he turns it around and tells me that Logan is going to be fine!  He too believes that you get what you put out there!

I am a very open person in general, and I think that is one of the reasons why I have chosen to be so open in sharing Logan’s fight, our story (with my husband’s permission, of course) for prayers and positive thoughts.  I have never believed more in the power of prayer than I do now.  The day we found out that Logan had a congenital glioblastoma and the doctors had no hope, I posted on Facebook and asked for prayers.  Two days later, the doctors told us they were confident with the treatment plan they received and were now “cautiously optimistic.”  Then this past Sunday I posted and asked for prayers for Logan’s counts to go back up and they went up so quickly we were allowed to come home for a few days.  So please, I can’t thank you all enough, and continue to ask for more prayers and positive thoughts as Logan is truly in a fight for his life.

I also need to give a shout out to JoDee Kenney from Spectrum News 9.  She reached out to me and wanted to help us share our story.  Not only are we fighting for our son’s life but we need to bring awareness to pediatric cancer.  Only 4% of federal funding goes to Children’s Cancer Research…more money is spent on research for the cancers that a lot of times are preventable by life choices.  Not that those aren’t important as well, but what about children being our future?   Maybe if there was more funding for Children’s Cancer Research, one of the kids they save could find a cure for cancer!!

Kevin and I firmly believe that Logan chose us to be his parents for a reason. We feel that we are strong enough for him, and for each other, to get him through this and past this.  We know and are surrounded by the right people and a great support network.  And yes, we believe that if God brings you to it he will bring you through it, and that God doesn’t give you more than you can handle.  No matter how much it sucks, everything does happen for a reason!  Not only has this whole situation been surreal, it’s been very ironic.  The fact that I work for Aflac and sell cancer insurance for a living is one of many ironies.  Thank GOD I added Logan to our cancer plan when he was born…thinking we would never have to use it.  Aflac also has their own Children’s Cancer Center in Atlanta, whom just so happen to write the chemotherapy treatment plan that Logan is receiving.  I also am a member of the Capital Region Rotary Club that donates toys to the Children’s Hospital at Albany Medical Center every year.  We will now be recipients of that this year.  One of the women I am in Rotary with is engaged to the General Manager at the Hilton across the street from the hospital and comps us a room whenever he has availability. He has also known my father for 30 years.  My in-laws are retired and drove up from North Carolina immediately to help us and have been taking care of our house, animals, laundry, etc.  Like I said, many ironic things, along with all of you who have reached out, and surrounded us with support we couldn’t have imagined.

So, that is what’s been going on.

Thank you all who have donated both monetary and otherwise.  We are so appreciative and grateful for every single one of you.

We are all Logan Strong!!!!