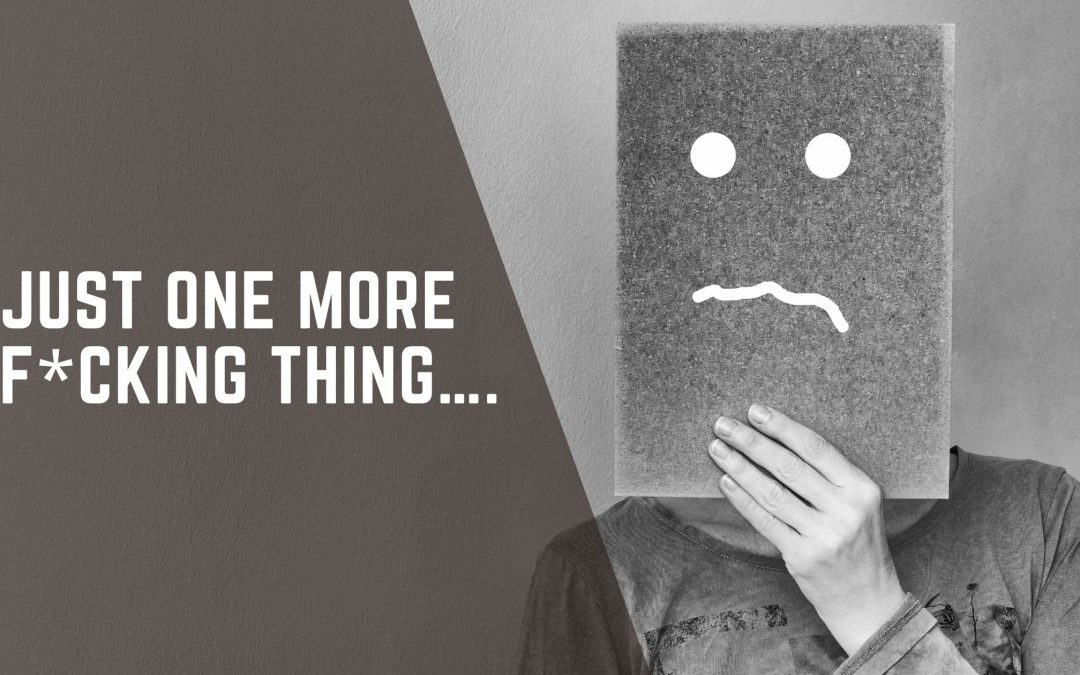 Yup, I said it!  Just one more f*cking thing.  I swear this will be the title of the last chapter of my book….if I ever get caught up on it!  UGH!

It’s been a while since my last blog post and I figured now was the best time to update, being the first day of Childhood Cancer Awareness month, Logan’s starts kindergarten next week and there’s just one more f*cking thing with Logan that I wanted to share.

So, what’s been going on…..I’ve been home with Logan for the past almost 18 months.  I’m grateful for my career and the ability to do so.  I work part time, mostly virtually and pick Logan up from school every day, handle his therapies, doctor appointments and tons of paperwork for all the services he received; that’s a part time job in itself! He just finished summer school (extension of Pre-K) the second week of August, so I have been home with him since then, barely working at all!

He has come so far in such a short period of time.  I am so proud of him, he is smart, never gives up and is absolutely adorable!  I’m super blessed and amazed with this kid on a daily basis.  But life is not all sunshine and rainbows by any means.  Yes, he’s a good kid, he’s independent but it’s hard, really hard.  I don’t get a lot of my stuff done, whether it’s work, Logan Strong Foundation tasks, writing my book or regular household chores.  I swear, the second he sees me sit down on the couch with my laptop or start folding laundry, he attacks me….he will hit, bite, scratch.  It’s very frustrating and I don’t have a lot of patience as is, so the only patience I do have is reserved for him.

There have been several times people have asked to help or take something off my plate and unfortunately any time I agree, I end up disappointed and doing it myself anyway.  So, needless to say my time is very limited!

We get invited to events and we either decline because it’s too much or if we agree to go, we have to plan his feeding schedule and nap around the time of the event.  We also need to go together, I say “we” meaning me and my husband but if he gets called into work, I won’t go to said event.  Logan is a two-man job, otherwise my time is spent chasing him because all this kid does is run…run…run!!!!  It’s exhausting and doesn’t leave time for having conversations or even just going to the bathroom!  #JS

Random thought: I really wish places had reserved time blocks or appointment times for children with special needs.  There are so many things I want to do with Logan and have him experience but it’s hard when there are so many people around and it’s not fair to the other kids if we do something and the ride or event needs to stop early because Logan is flipping out.  But how is this fair to Logan…. he deserves those experiences as well!

With all this being said, let me update you on what’s been going on….

Logan graduated pre-school in June…. I can’t believe it!  He had a week off then summer school all of July and the first two weeks of August.  Meanwhile, I was trying to work part time, started writing my book and planning the 4th Annual Logan Cup (our annual golf tournament and biggest fundraiser for the Logan Strong Foundation). I was sick for almost two weeks in August, it was awful.  Just a nasty virus, haven’t been that sick in a very long time…no, it wasn’t covid.

We then took Logan to see his daddy race (motorcycles) for the first time in New Hampshire.  He absolutely loved it.  He loves to watch Nascar and Motorcycle races on TV.  We watched daddy from the straight away/starting line.  Mommy can’t watch Daddy go over 100 miles an hour on a turn when his knee is basically touching the ground.  Logan giggled, smiled, and just had the look of pure joy in his face watching the motorcycles go by so fast and to top it off Daddy won his race!!!!

From there we decided to take a trip to Maine for a couple of days with my in-laws and mother and stepfather, as well.  I was dying to get Logan to the beach/ocean, I couldn’t wait until next year.  When we got there the weather was horrible but that didn’t stop us, so we went right to the beach in the pouring rain and again Logan absolutely loved it!  In fact, we got a beautiful family photo of our backs, in our raincoats, holding hands, facing the ocean in the rain.  It was PERFECT!  I didn’t care about the weather, just the experience.

The weather wasn’t that great the next either, but we just went downtown walked around, got ice cream and of course, taffy!  My mom and stepdad took us to dinner that night for my birthday (it was the day before) and Kevin’s birthday (a week before) while my in-laws watched Logan.  It was nice to get out!

The last day we were there, the weather broke, and it was gorgeous out!  We took Logan right down to the beach and this kid just ran and ran and ran!  He LOVED it….it was the most amazing thing to see and experience.  It was so cute…. he tried pushing the water back in the ocean.  I can’t wait to take him again!  We decided to go back downtown and take him to the zoo there but he could have cared less but again, it’s all about the experience and helping him learn and grow in different situations.

Now, let me back up a bit…. throughout the past few months we’ve been preparing for Kindergarten, which included several virtual meetings, conversations with teachers and therapists, chatting with the doctors to get appropriate scripts and evaluations.  One evaluation we had, I wasn’t expecting and didn’t like when it was told to us…..

So, here comes our one more f*cking thing……

I received a phone call back in June from Dr. Lucas, Logan’s Developmental Pediatrician, after we had reached out to her regarding several behaviors that Logan was having.  She asked school, including his one-on-one aid, day care and us (his parents) to fill out a questionnaire that would help her determine next steps.  After reviewing the information and speaking with several of us, she concluded that she wanted to test Logan for Autism.  I started crying immediately.  I’m tearing up right now, just typing this.  Dr. Lucas mentioned to us a couple of years ago that she was concerned that he may have autism but quickly took back her statement, that Logan was making appropriate eye contact and was very social.  So, when she made this statement to me again, I was devastated.

Let me be honest, I trust Dr. Lucas 1000% and I can have an open, honest conversation with her.  She was super sweet and understanding throughout the conversation and was even kind enough to call my husband directly the next day and call me back to talk each of us through her thought process.  While, I don’t like that she said this, I trust her and at the end of the day an autism diagnosis would only help Logan get additional services and support all of us in dealing with these behaviors…..the biting, the hitting, the aggression, the impulsivity!  I then asked her how do they know it’s not the brain injury…. she said, “we don’t!”  Then I asked how many children with brain injuries are diagnosed with autism and she said, “a lot!”

It’s not so much the potential autism diagnosis that was bothering me it was the fact that is was “one more f*cking thing!” that we had to go through, “one more f*cking box” we have to check for our son.  Haven’t we been through enough!?!?

We scheduled his evaluation for the following week and this little shit slept through it!  LOL  It worked out though as it gave Kevin and I the opportunity to spend that time chatting with Dr. Lucas to understand where she was coming from, what she was thinking, what the process looks like, etc.  He finally had his evaluation three weeks later and I could just tell we were getting the diagnosis.

A week later we received the paperwork in the mail and it was confirmed, Logan now has an ASD Diagnosis (Autism Spectrum Disorder).  Again, I don’t like it, I truly in my heart and gut believe it’s the brain injury but if it’s going to help him get additional services then it is what it is.  Dr. Lucas made a good point, she said I would rather have him have the Autism diagnosis and get the help he needs with his behaviors rather than have him labeled as being defiant.  It makes sense but I don’t have to like it.

Childhood cancer did this to my child….if he never had a brain tumor, he would have never had to have a tumor resection (removing his left front lobe), not to mention the insane amount of chemo, then we wouldn’t even be having this conversation!